As we move past the middle of the year and 2019 looms on the horizon, a wealth of midyear real estate market data has become available. The California Association of Realtors (CAR) has released their June 2018 California Housing Market Update. In addition, we can look to other sources for information on the Sacramento region, such as Zillow and Trulia, and the Sacramento Association of Realtors (SAR).

Prices continue to climb across California, and in Sacramento in particular.

Housing inventory is extremely low, well within the territory of a seller’s market. 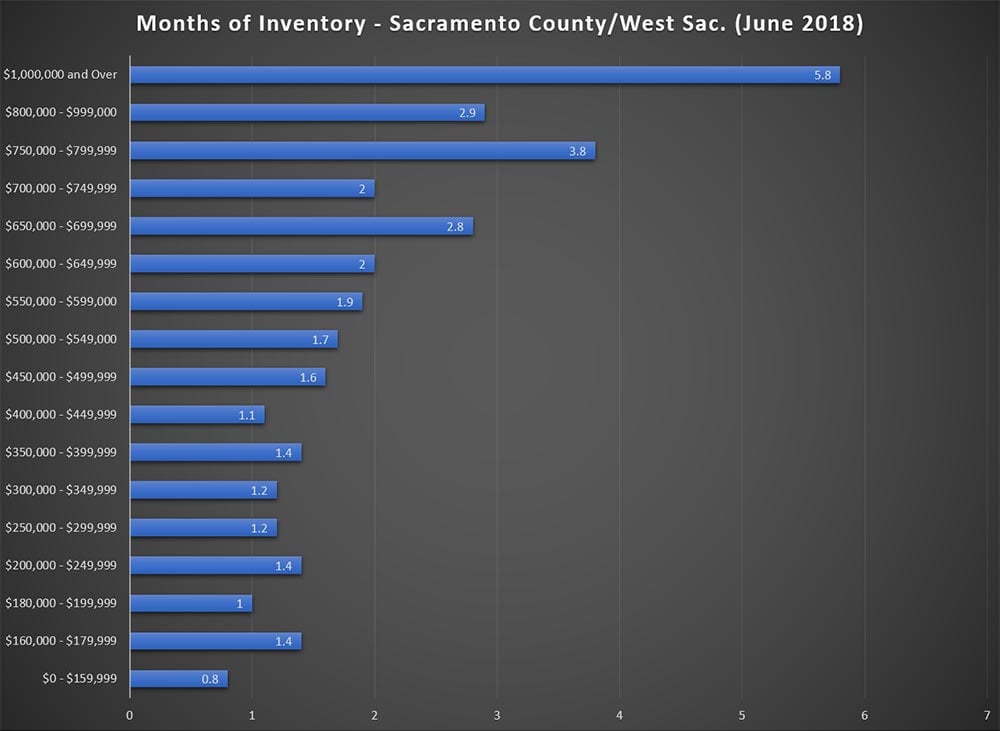 As inventory continues to be scarce, sales volume has declined throughout California.

410,800 SFRs were sold in 2018, a decline of more than 7% versus the previous June. This decline was felt most keenly in Southern California, where sales dropped by 12% YOY. This continues a trend going back to the beginning of the year. Meanwhile, the Bay Area experienced an 8% decline, and the Central Valley a decline of 6%.

YOY sales also declined in Sacramento—though by a far lesser degree that elsewhere—dropping by just over 3%.

This decline in volume correlates heavily with listing prices. Statewide, sales volumes declined YOY for every price segment except homes over $1 million.

Throughout California, the median time on market has reached almost record lows, with Sacramento outpacing the state average.

Since 2005, the record low time-on-market figure is approximately 14 days, achieved in mid-2017. While this figure subsequently jumped to more than 30 days, we have experienced a steady decline. In June 2018 the median DOM reached 15 days.

Having just come through a period of significant price appreciation, and with the Fed set to increase the prime rate again, prices are overdue for a reversal.

Statewide, we have seen a seasonal decline in prices every fall since 2010. Between the nearly 10% increase in price, and the Federal Reserve signaling they would raise rates in September and December, there is no reason to believe that we won’t experience a similar correction over the next few months.

Higher interest rates will likely have a major impact on the market. It will become more difficult for new buyers, and those looking to upgrade, to afford current prices. We expect the current trend for days-on-market to reverse, and inventory on the market will continue to increase.

Of course, this is educated guesswork based upon the data on hand and previous historic trends. We will continue to watch the markets closely and react as necessary for the benefit of both borrowers and investors.